Wibbu English – a review of the beta

Wibbu English is a game for English learners that is currently in beta. It is designed for learners who speak Spanish, Portuguese and Chinese as a first language. The learning takes place inside a game environment where the learner takes control of a central character, Bethany, and guides her through a series of tasks interspersed with English learning exercises. 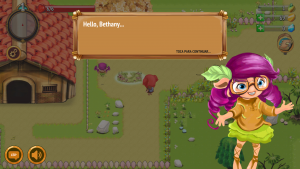 The learner can choose from multiple CEFR levels. Each language level presents that same game environment with story elements and learning elements graded. The textual elements of the story element are essentially the same; the game elements practice language that gets progressively more difficult.

The game starts with Bethany being introduced to some characters, among them her Dad and a fairy called Pix. The characters give them tasks such as collecting objects and learning challenges. The game is classic gamification – the whole environment is game like:

As you progress in the game, your lexicon increases and is available in a notebook for review. This takes language that is introduced both in the story elements from dialogues with the in-game characters as well as language practiced in the games. 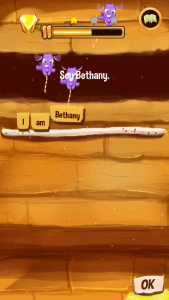 One of the learning games between the main game.

From the beta it is not clear if there will be any social elements or how much exploration there will be. The beta is solely linear with three tasks available. I am slightly confused by the claims in the Google Play description that there are ten missions – there does not seem to be any way past the third. 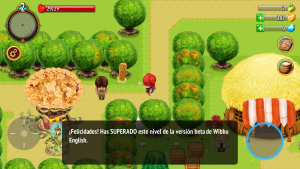 As far as you can go? Turning back after the third task.

Their website targets schools which would indicate there would be some sort of learning management system that a teacher could track students’ progress. This could be very powerful if the students start investing in the game.

This in in beta so it is not fair to be too critical of this. They are clearly garnering interest and seeking investment (there is a very clear request for this on their website).

Areas where the game could be improved:

I’m sceptical about how broad the appeal of this world of alchemy, pixies and adventure will be when the English is shoehorned in, in arguably a contrived manner.  It will be interesting to see how this game evolves.