The size of the education app market

One thing that is hard for educational app developers and distributors is gauging the size of the market and thus the opportunities for seeing a return on investment. Because the majority of all revenue generated in the two big app stores (Apple App Store and Google Play) is from games, the majority of discussion, print space and available information is also focused on games. However, these insights can shed light on the room left for educational apps.

A couple of months after it was released I picked up a paper released by Distimo focusing on the games categories in the app stores. It provided some interesting insights about the educational market too.

The first thing that was apparent was that the iPad market has the largest opportunity in terms of relative size.  Although the Games category dominates the download share, Education is the third biggest iPad category in terms of downloads with 6.1%  share. Only Entertainment and Games appear above Education.

For the iPhone, Games had less of a share but was still the largest and Education did not appear in the top five at all. The other categories that made up the top five were Entertainment, Photography,  Social Networking and Lifestyle.

On Android platforms, games also dominate – with Education not appearing at all in the top five categories for either Google Play or the Amazon Appstore. Unsurprisingly, considering the link to Amazon, the Kindle Fire devices see Entertainment as a larger category relative to other platforms.

In terms of the revenue share in the three stores Distimo focused on,  the iPad looks like it provides the most opportunity. 25% of income comes from non-Games categories compared with 16% for iPhone and only 8% on Google Play. 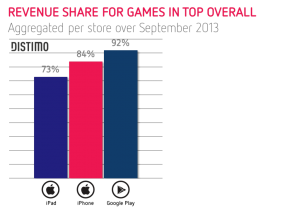 Another thing worth noting from that Distimo report was the breakdown by country: 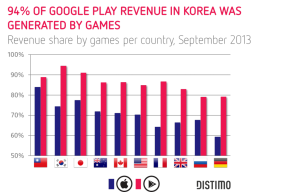 The Asian markets were more dominated by games than the European markets meaning less money available for anything else. This is concurrent with what I have seen with app numbers  – educational apps do seem to make more money in Europe with better conversion rates although they are downloaded a lot in Asian countries.

With the high costs of developing apps, educational-focused developers face a tough time in finding financial returns on that investment. The European iPad market may be the best area to focus on.