In app purchasing and kids apps

So, Apple get fined US$32.5 million by the Federal Trade Commission in the US over practices that allow kids to make unauthorised in app purchases. It is yet to see how Apple will apply changes to ensure they do not get accused of this again. They say they were already working on measures to prevent this but these have yet to be rolled out.

One of the things Apple has already done is set up a separate kids’ category which does not allow apps with in app purchasing.

I suspect the main cause of these unauthorised payments that kids are making is through consumable items in games (such as gems/coins which can be spent). Educational apps which have in-app purchasing tend to use non-consumable items (such as additional books which can be reused again and again). Therefore the protection of kids and their parents’ wallets is less of an issue than in games, yet still an important one.

Of course, the parents can set up restrictions on a device, but that’s only really effective if the device is solely used by the child itself. So for example, my son’s iPod touch has restrictions enabled which bar in-app purchases. If he really wants something we can discuss it, and I can temporarily disable this restriction if we agree it’s a worthwhile use of real money. However, on my iPad I don’t have this restriction as it would be a pain for me, my sons still use the iPad for their games too though and I suspect this is the primary case where unauthorised payments get made – on parents’ devices.

This restrictions (Settings > General > Restrictions) area is also the place where the device can be set to ask for passwords for purchases immediately, but the default is 15 minutes – i.e. if the password has been entered in the last 15 minutes, the user won’t be prompted again.

Developers are starting to put an extra layer of protection in apps to protect parents with purchasable items hidden behind an interaction that is designed to be kid safe. An example of this is in the Disney Classics Collection app…

On selecting an in-app item which is for sale, the user is first prompted with a dialog box which points out that you need to get an adult to help with this…

The user is then presented with a clearly labelled ‘grown-ups only’ section which presents a task; in this case to enter the numeral form of a string of written numbers. 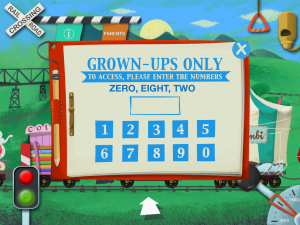 What I want to know is, and something that I intend to test out, is how difficult is this sort of task for the target audience?

Other apps use similar tasks, this one from Learning with Homer asks the user to solve a maths problem. 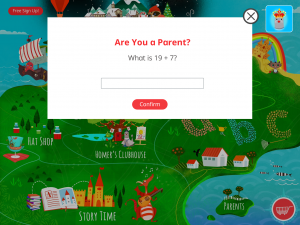 My initial feeling is that this is too easy and the sum is something that a child in the target age group range could easily solve themselves.

Of course, the apps are at least trying to help parents here – and this is an additional layer that the real money draining games do not have as common.

Much more on this to come I’m sure…