As mentioned previously I have been making a concerted effort to improve my Mandarin Chinese – and using my mobile phones (my job means this is plural) to help me do so. I’ll start my reflections with a review of one of the apps I have been using. In fact the one I have been using the most. 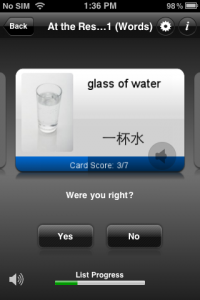 Byki Mandarin Chinese (iOS, US$7.99) allows the user to browse sets of flashcards, grouped into common themes such as At the restuarant, Colours etc. The basic premise is simple with three effective steps:

Step 1 – Look through the cards, listen to the word/phrase in Mandarin. Each card comes with the Chinese characters, pinyin (Latinized transcription), picture and a card score (out of 7)

Step 2 – See the written word, say or think the word in English, then flip the card to check. Self mark and the card score goes up one point if correct and down two point if wrong. If wrong you immediately get shown the same card.

Step 3 – See the English and say/think the Chinese. Self mark again. When you get the card score to seven you stop seeing it.

Once completed there is a multiple choice quiz, and this is one of the few negatives about the app – this is much easier than the previous round so provides little challenge. Even so, it’s kinda nice rushing through this, getting 100% correct.

This app has been out for a while – I remember coming across it when reviewing apps while I built MyWordBook, but I have to admit that I probably didn’t give it the amount of time it was worthy of. Having used this quite a bit recently I would say this is definitely one of the best vocabulary tools on the market.

What could be improved:

Byki is also available for Android and I’ve just downloaded which looks ok – not as nice looking as the iOS version but still the same functionality. It’s a memory hog though and there is no way to move it to the SD card which is a major negative. Hopefully they will address this soon. The full list of languages available can be found on their website at http://www.transparent.com/mobile/.
previous article next article